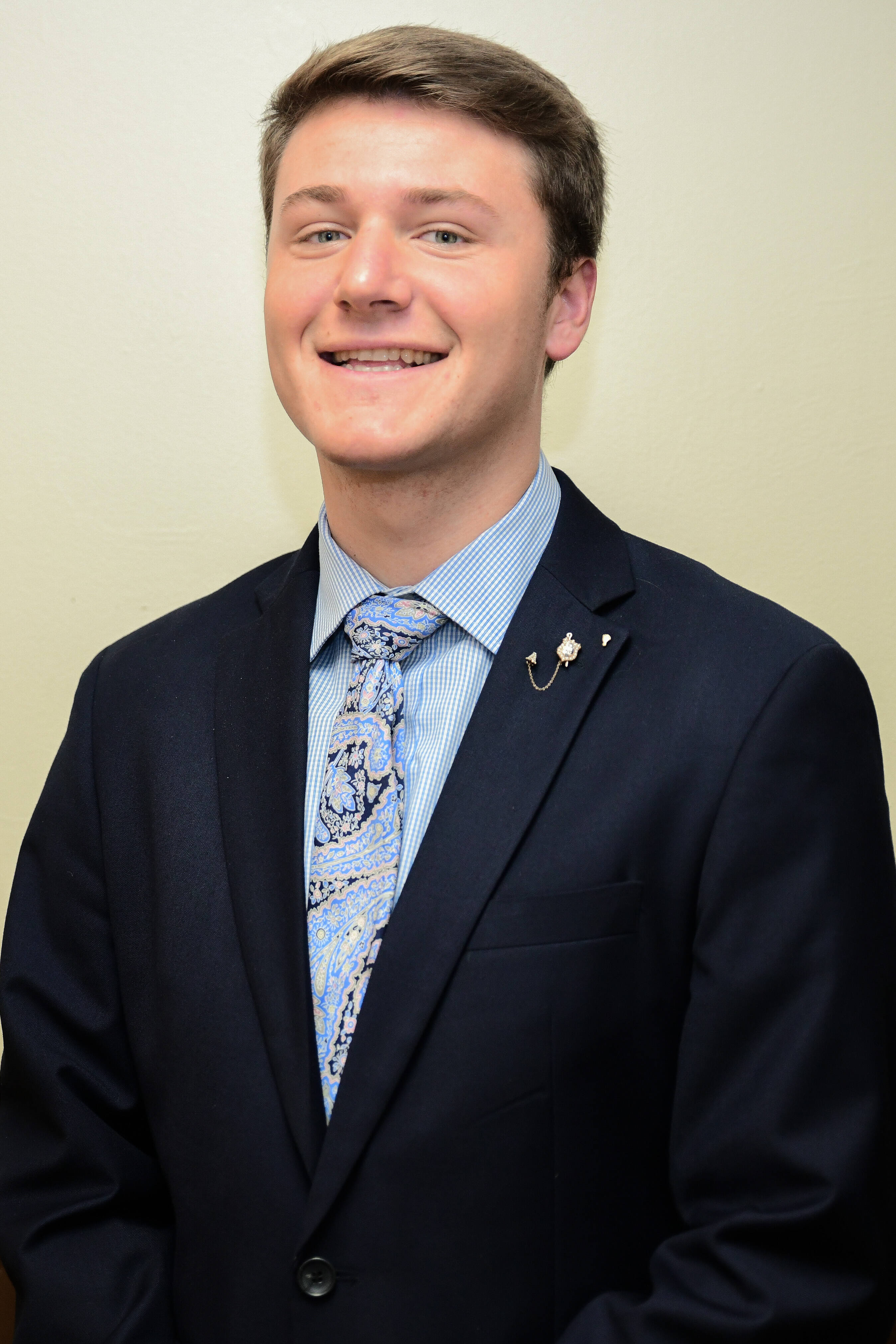 It is exciting and rewarding to serve as the president of Delta Theta Sigma Alpha chapter here at The Ohio State University!

The Brotherhood of Delta Theta Sigma is one of the many opportunities for students offered here on campus. As a social-professional fraternity, we strive to develop the skills and values in our members, so that they may lead the life of a successful and contributing member of their workplace and community.

Through our values of knowledge and Brotherhood, our chapter looks forward to all that we may accomplish through our collaborated efforts.

The brotherhood of Delta Theta Sigma is composed of elite agriculture majors from all over the United States. The national Delta Theta Sigma network includes seven chapters through Penn State University, Wisconsin University, University of Minnesota, Wilmington College of Ohio, University of Wisconsin River Falls, and University of Minnesota Crookston. Brothers share common interests in agriculture, sports, rural life, and outdoor recreation. A majority of the members come from farm backgrounds or rural areas, which provides common bonds through experiences.

Delta Theta Sigma is located a half block away from The Ohio State University. We are on thirteenth avenue, just down the street from the Ohio Union. Just about everywhere on campus is within walking distance. There are also many different bus hubs located near us such as CABS and COTA that allow you to get across campus or access the great city of Columbus. We are also located near many restaurants and other stores needed to fulfill student needs.

In the spring of 1906, several men gathered together in a rooming house at 175 West 9th Avenue in Columbus, Ohio. The idea, conceived primarily by three men: Maxwell Corotius, Samuel N. Kerr, and Stanley B. Stowe was the actual beginning of Delta Theta Sigma Fraternity at The Ohio State University. The fraternity was incorporated under the laws of the State of Ohio on April 5, 1907 with 17 charter members. The name, Delta Theta Sigma, and the four-fold purposes of the fraternity were drafted with the advice of Professor Smith of the Greek Language Department at Ohio State University.

The first Conclave of the newly formed National Delta Theta Sigma was held December 21 - 22, 1928 at Alpha Chapter in Ohio. Biennial conclaves were held thereafter until 1941. At the first conclave, the structure and role of the National Chapter was further developed with the revision of the constitution to the basic form in which it has survived to the present, which was essentially a blending of ideas from all three chapters. The various parts of the national ritual were derived from established procedures from each chapter. For example, the installation of officers originated at Beta, the new member education process at Alpha, and the Fraternity Toast from Gamma. At this first conclave it was also established that one of the primary roles of the National Chapter was to be expansion, and the National Vice-President was placed in charge of expansion, a role that this office has traditionally held ever since. The national publication, "The Delta Theta Sigma Shield" was authorized by the second Conclave in 1931, and the first issue was edited by E. W. Rohrbeck of Gamma in the following year.

In 1935, at the fourth conclave, the National Chapter instituted a National Scholarship Award to be given to the outstanding freshman in each chapter. This award evolved into the National Pledge Award, and finally it was replaced by the Outstanding Brother Award. The National Scholarship Trophy, to be awarded to the chapter with the highest grade-point average, was a development of the seventh Conclave in 1941. At this conclave it was also decided to hold annual conclaves instead of biennial conclaves. However, the Second World War disrupted these plans and indeed, all other activities of National Delta Theta Sigma until 1947.

Although expansion had been actively discussed at nearly every conclave, no real success in this area had been recorded. As early as the 1933 conclave there had been some discussion of a merger with Farmhouse Fraternity. By 1947, there was a strong movement among alumni of both fraternities to merge the two. At this time, Farmhouse had eight chapters. In 1947, representatives of Farmhouse attended the Delta Theta Sigma conclave and proposed a merger. In 1948, Delta Theta Sigma and Farmhouse entered into a two-year affiliation period which resulted in the joint publication of a newsletter and directory and mutual attendance at each others conclaves. This affiliation was culminated in 1950 by holding a joint conclave in Urbana, Illinois. The merger attempt, however, ultimately failed because of a disagreement on whether the National Fraternity was to have a Greek-letter name or to be called Farmhouse. The active chapters of Delta Theta Sigma played the decisive role in defeating the merger, which perhaps better than any other historical example points out the basic position of the active chapters in directing the affairs of National Delta Theta Sigma.

In the decade following the merger failure, National Delta Theta Sigma and the local chapters made many changes which strengthened the fraternity. The now annual conclaves were major events in the active chapter programs with many more activities participating. In 1951, the workshop program at conclaves was instituted from which many innovations have resulted. The National Visitations of each chapter, which was instituted in 1957, was first suggested by a conclave workshop in 1952.

Revitalized expansion activities led to the establishment of a new chapter, Delta, at the University of Minnesota on May 24, 1958. This chapter was started virtually from nothing through the dedicated efforts of a dozen Delta Theta Sigma Alumni living in the Minneapolis - St. Paul area with the strong support of the National Executive Council and the three original chapters. During the 1960-61 school year, Delta Chapter rented their first and present chapter home located at 1485 N. Cleveland Avenue. Then, in the fall of 1966 growth required them to rent the downstairs of the house next door at 1495 N. Cleveland Avenue. This property was purchased in 1977 giving Delta chapter expanded facilities and a very desirable location for future expansion.

The initial attempt to establish a colony of Delta Theta Sigma on the River Falls campus at the University of Wisconsin was made by Dr. A. J. Beaver, an alumnus of Gamma Chapter, who sought to find out if there was sufficient interest in establishing a chapter of Delta Theta Sigma at River Falls, Wisconsin. The first meeting was held on April 19, 1967, with representatives from Delta Chapter present. Twenty-five individuals showed interest in the development of another fraternity.

On May 2, 1967, twenty-two individuals were present for the second interest meeting and temporary officers were elected. Representatives from Gamma as well as Delta Chapters informed them of what Delta Theta Sigma had to offer. Work began at River Falls towards establishment of a new fraternity. A petition was drawn up by a committee and signed by the twenty-four individuals which was presented to the Delta Theta Sigma National Executive Committee. This presentation was made at the annual executive committee meeting at the Delta Chapter residence on May 20, 1967.  During June, a letter of acknowledgement was received from National President Al Wolf on behalf of the National Executive Committee. This letter stated conditions to be followed during the period of colonization. These conditions were subject to the approval of the individual chapters.

Five delegates attended the 1967 conclave to seek permission to use the name of Delta Theta Sigma. The group was given this permission as long as they sought chapter status within a reasonable period of time. Shortly after the delegates returned from the conclave, a committee was formed to draft a constitution for the organization. Within a short period of time, a model constitution had been completed and presented to the group. After ratification of the constitution by the group, the constitution was presented to the Greek Letter Council and approval was received on January 29, 1968. Subsequent approval by the Student Senate on February 7, 1968, officially recognized Delta Theta Sigma as a fraternity of the River Falls campus.

The actives of Delta Chapter, serving as big brothers, conducted regular weekly pledge classes from March 13 to April 17, and on April 24, 1968, the pledges were initiated as active members of the River Falls Colony of Delta Theta Sigma Fraternity. On the following Saturday evening the members held their first annual Spring Semi-formal.  During the summer vacation a petition committee drafted a petition to be presented at the 1968 National Conclave of Delta Theta Sigma Fraternity. Thirteen members attended the Conclave and witnessed the acceptance of the petition during the official meeting.

April 26, 1969 was the most memorable day for the River Falls group. It was on that date that the River Falls Colony was officially installed as Epsilon Chapter of National Delta Theta Sigma Fraternity. Albert Beaver, Gamma Chapter alumnus, was instrumental in organizing Epsilon, and in 1970, helped them to purchase the house in which they are presently located. Epsilon extensively remodeled its house in 1980.

Our sixth chapter, Zeta, was organized and chartered at Purdue University in West Lafayette, Indiana, in the spring of 1982. With the help of four alumni: Neils Neilson, Gamma; George Van Scoyoc and Jim Vorst, Alpha; and Herb Ohm, Delta, the thirteen chapter members and one new member were activated by National Delta Theta Sigma officers in May 1982. Zeta was very fortunate to be able to rent a house their first year and are presently located at 127 Waldron Street, West Lafayette, IN. At the 2010 Conclave, the Zeta Chapter lost recognition due to inactivity within the chapter.

In January of 1983, agricultural students at Wilmington College had a desire to belong to a national fraternity. After contacting several agricultural fraternities, Delta Theta Sigma was selected as the top choice. Through the leadership of senior J. Timothy McCarty, 36 students were recruited and expressed the desire to become founding fathers of Eta chapter. With the leadership and direction of national Officer Rick Harr, the Eta chapter was organized and chartered in the Spring of 1983. In the Fall of 1983, a large house near campus came up for sale. With the help of the National Executive Council, the purchase was completed and the house was occupied in January 1984. The house is located at 780 Rombach, Wilmington, OH.